It is something that, unless you get a hole in one, you have to do on every hole on the course: throwing from a marked lie in the fairway.  It is also something that, until you decide to play in a competitive event, is an easy thing to not be concerned with as you play.

Best to start with defining what exactly a lie is before explaining how to play from it, and the appropriate rule for that is 802.05 Lie.  For the purposes of this discussion, the key section is part D of the rule which states:

Line of play is the most important component of defining the lie. If the description within the rule is not enough, here is a graphic demonstration of the line of play. 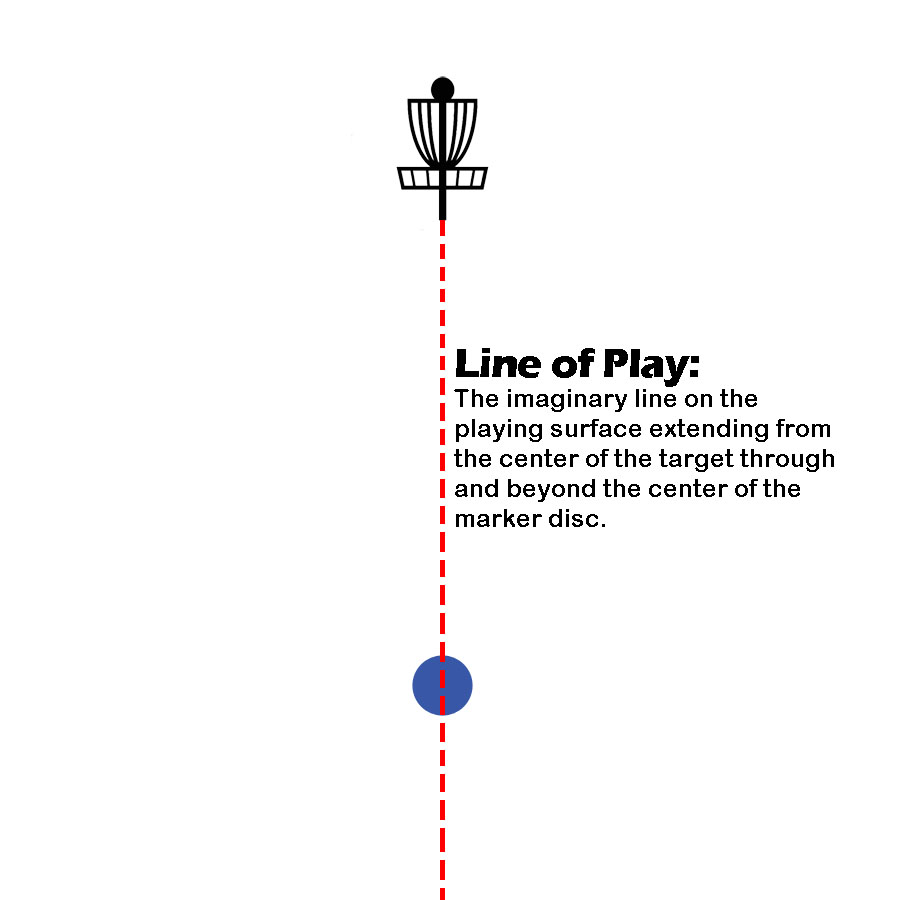 Definitions now in mind, we can jump into the primary rule at hand, 802.07 Stance.

A. If the lie has been marked by a marker disc, then when the disc is released, the player must:

This is the heart of taking a stance in the fairway.  Part one is having at least one supporting point in contact within the 20×30 cm box centered on the line of play directly behind the disc.  That point can be a foot, knee, hand, elbow, even one’s head if so inclined. 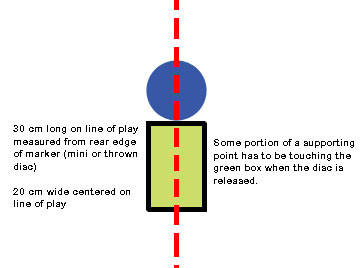 Part two has more to do with the supporting points outside the one on the lie (though that point can not be contacting or extending in front of the rear edge of the disc).  Those points can be anywhere on the playing surface except somewhere closer to the target than the rear edge of the marker.  Bear in mind that the border of what is closer and what is not is defined by an arc (see below).  As long as everything is behind that arc at the moment of release, it is in a legal position.

It is important than when taking a stance anywhere on the fairway, it must be taken as is.  This includes working around any obstacles that may be in the way of the stance.

For example, if one’s lie is under a tree or bush, then the stance taken must result in the least possible movement of the tree or bush.  If that means one has to lay down on the ground to avoid bending, breaking or otherwise moving branches to take a stance, then that is what must be done.  The rules entitle a player only to a legal stance, not necessarily a comfortable or preferable one.

After release, where any of the player’s supporting points go is largely inconsequential.  Following through with the natural motion of your throw is allowed with one significant exception, and that is in the putting area…

B. After having released a putt, the player must demonstrate full control of balance behind the marker disc before advancing toward the target. A player who fails to do so has committed a stance violation and receives one penalty throw.

Here is the trickiest part of any stance away from the tee.  When the lie is within 10 meters (approximately 32.8 feet), following through after the throw is against the rules.  To avoid the follow through, the player must demonstrate balance before making contact with anything closer to the target than the rear edge of the disc.

Any player in the group may call another on a stance violation when one occurs, and that includes calling it on oneself.  The call must be made promptly, typically before the result of the throw is known.  As is the case with any violation that comes with a penalty, two or more players must agree that the violation occurred. See rule 801.02.E.

A call made by a player for a rules violation that results in one or more penalty throws can only be enforced if the call is confirmed by another player in the group or by a Tournament Official. A penalty throw is a throw added to a player’s score for violating a rule, or for relocation of the lie as called for by a rule.

So in the case of a stance violation being called, it requires at least one other player to “second” the call in order for it to stand and a penalty to be applied.  The thrower plays on from the result of his/her throw after the call is made, adding one throw to their score for the hole.

That’s it.  A rather simple part of the game that is at the heart of fair competitive play. The spirit of the game is to play the disc as it lies, and through these rules, we ensure exactly what “as it lies” means.  With a bit of practice, complying with it becomes almost second nature.