The DDGC has always prided itself on having unique and special trophies for its winners, some coming out better than others. Sooner than we expected and sooner than we’ve ever had before, the trophies for DDGC17 are already done and in our hands. And we can’t resist showing them off.

Cut from wrought iron with a powder-coat finish, they are the design of Kyle Enman and the handiwork of Kyle and his co-worker Matt Belliveau (Matt did the cutting, Kyle did the powder-coat). These easily rank in our top 3 trophies ever and a strong case could be made that these are the best we’ve ever offered. The winner in each division will go home with one of these in the “gold-vein” powdercoat, while second place in select divisions will get the “penny-vein” versions.

Without further ado, here they are. A Sacagawea dollar coin is included in the pictures for scale. 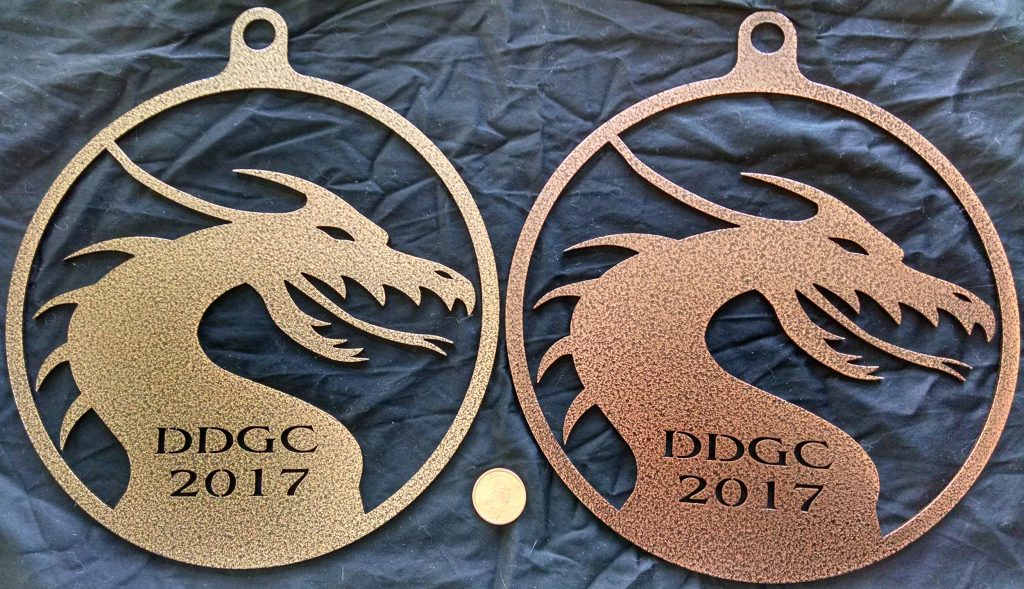 Who wants one?  Start practicing now and be at your best on June 3, and you might just win one.

The 2016 DDGC is in the books. The weather was beautiful.  The course was sufficiently challenging.  The players were on their game.  Everything went about as well as could be hoped for.

We had four defending champions do so successfully: Bob Enman in Adv Grandmasters, Jacklyn Bogan in Adv Women, Erica Johnson in Pro Women, and our first three-peat champ, Tyler Grady in Pro Open.  Full results, with unofficial ratings, are posted at PDGA.com.

Also of note, Dave Delisle and Nick Blouin won the Double Dragons round in the morning with a 46 and Kieran Nichols shot the hot round of the Dragon’s Tail Nine with a 25.  There was also an ace on hole 10 by Jamie White, good for $100.

Some numbers…we collected a total of $1905 in gross entry fees from 71 players (+$130 in non-member fees for the PDGA).  Between cash prizes, players packs, CTPs, ace pots, and trophies, we paid out a little over $5000 in total value by the end of the day.  And doesn’t even take into account the player fees to be paid to PDGA and NEFA for sanctioning.  When it’s dribs and drabs over the course of a few months as the event approaches, it doesn’t really seem like much, but seeing it all added together is overwhelming.

And it’s all due not just to the generous sponsors we acquired as the event approached (listed on our sponsor page), but a slew of last minute sponsors who surprised us with prize donations on Saturday morning.  These folks include NEFA for sending a Two Roads Brewing prize pack, Mat Ladroga for donating a cool dyed disc, Bobby Harris for donating a disc, and Kris Gosselin and the Maine Disc Golf Tour for donating some logoed shirts and sweatshirts.  Those prizes were added to the CTP prize packs we already had, putting the value of the day’s CTPs alone over $550.

DDGC16 may be over, but the wheels are already turning and work is starting on DDGC17. We want to build on what worked well, tweak what needs tweaking, and see if we can’t make the next one bigger and better than the last.

Thanks to everyone who attended the event…players, caddies, spotters, photographers, and spectators.  Watch this space for news about DDGC17 as it is available, starting with this:  DDGC17 will happen on June 3, 2017.

Courtesy of Dynamic Discs, we will be raffling off a brand new Sniper backpack in an effort to raise some funds for the tournament purse.  We’re also looking to add more raffle prizes as we get closer to tournament day. (see our Referral Program if you have or know of any prize opportunities)

Dynamic describes the Sniper this way:

“The first entry level backpack style bag of quality has arrived. Nothing close to this style, durability, and structure has ever been available for this low of a price. Holding 16 discs in the main compartment, this is not just a “weekend” bag. It can handle all you will need on the course. With a deep top zippered pocket and internal mesh pocket to take care of all of your extras, 2 bottle holders to carry your drinks and reinforced padded backpack straps, the Sniper is ready to get on the course and take out the competition.“

Pricing for tickets is one ticket for $2, five tickets for $5, 15 tickets for $10, 30 tickets for $20 and 50 tickets for $30.  They can be purchased in person at the Dragan Field pro shop or online at the MaineDiscGolf.com Store.

Drawing for the bag and any other prizes will take place right before the first round begins on June 4.  You do not need to be present to win. 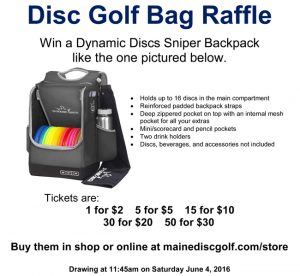 Another reminder about our Sponsor Referral Program and the opportunity it can create for just about anyone who plays at Dragan Field. If you run a business or know someone who does – say your own employer – a small bit of advertising couldn’t hurt, right? We can’t find every potential sponsor on our own, so we’re putting it out to everyone to help out.

We’re open to anything and everything that we can pass on to our tournament players in their registration packs, as CTP/door prizes, or as raffle items.  Of course, cold hard cash for the Pros works too.  For as little as $20 in value, any person or business can put their name on a sign (at minimum) to be seen by everyone attending the tournament.

We pay commission on every sponsor brought in, in the form of free play at Dragan Field.  Every $20 raised earns a day pass in commission.  Earn enough and we’ll convert the day passes to a full season pass.  All the details are on our Sponsor Referral Program page.

Help out, get free play.  What’s better than that?

For the third year running, the spring session of Dragan Field’s Monday Night Doubles will award a free entry to the DDGC to its overall winner.  Details can be found on the Monday Night Doubles page.  Note that this entry can be won by a player already registered for the tournament (their paid entry fee would be refunded and the first available player on the tournament wait list will be elevated).

Dynamic Discs has generously agreed to sponsor Monday Night Doubles by providing keychains that will be awarded as “trophies” to the winning team each week.  Players are encouraged to collect the keychains by hanging them from their golf bag, as the individual players with the most keychains at the end of the series will be awarded bonus points toward their total.

The series kicks off on the first Monday after the start of Daylight Saving, March 14.  Be there!